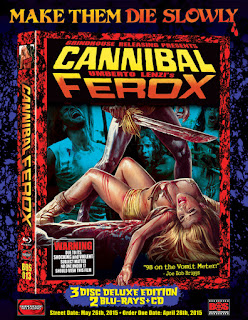 Cannibal Ferox / Make them Die Slowly is another in a long list of Cannibal / Exploitation films. Again this one is fairly high on the gore scale and sits in a similar place to Cannibal Holocaust.

The plot this time revolves around two female university students who venture into the South American jungle. One of whom is writing a thesis attempting to disprove the ‘myth’ that there are cannibal tribes in south America. Whilst there they meet up with two other westerners Mike and Joe. Whilst Joe seems alright, Mike is a cocaine addicted sadist and has already garnered the wrath of the local indian tribes after butchering a male tribe member. Mike is the kind of asshole character that you just can’t wait to be eaten.

Eventually the natives have had a gutful (no pun intended) of the white folk. The strange white folk have now killed a couple of their tribes people and attempted to rip them off for the gem wealth the region contains. They  begin to hunt the white folk and eat them in suitably gory and disgusting fashion.

THE VERDICT ON CANNIBAL FEROX / MAKE THEM DIE SLOWLY

Over all Cannibal Ferox / Make them Die Slowly is a pretty cool flick.  I’m a bit of a sucker for the cannibal genre so there is a little bias in here. Again if you’re new to the genre, this along with Cannibal Holocaust are as suitable points as any to entre the genre. As far as the gore content goes I’d say its not as extreme as Cannibal Holocaust but not to far off either. Whilst I’m not entirely sure of the history of this film the cover says it was banned in 31 countries. There’s also neat warning before the film  making us aware of this films’ extremity. Obviously this is at the more extreme end of horror and probably best not for the faint hearted the easily offended or those new to the horror genre. Enjoy!!

For more great horror movie reviews and streaming be sure to check out https://www.gorenography.com on a regular basis!