Well with yet another Friday 13th upon us why not re-visit one of the greatest horror franchises of all time, this time it’s  Friday the 13th part 3  that goes under the postmortem examination. 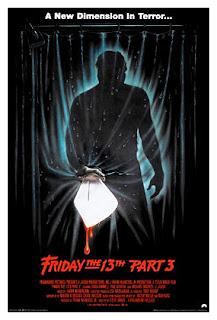 This installments starts of with a handy re-cap of the events of the last film (which was great because its been a while since I’ve indulged in watching them). Then kicks off into the immediate wake of Jason’s killing spree in part 2. The body count starts to rise from the start with Jason still on the loose and adding to his grizzly death tally.

THE PLOT OF FRIDAY THE 13th PART 3

After the run in with the teens the bikers co-incidently stop in at the farmhouse the teenagers have rented and unbeknownst to them that Jason has also taken up refuge in. This is where the mayhem and the killings starts again.

Probably the most important thing about this film is while at this farmhouse Jason finds his trademark hockey mask. Unbeknownst to the filmmakers setting up  the iconic imagery  by which the whole franchise <i>(one of the biggest in horror history)</i> would be known.

Over all im going to say I don’t find anything particularly ground breaking or brilliant about Friday the 13th part 3. It’s a cool watch and keeps the franchise going nicely. I didn’t find the violence as realistic as the first two films, some of it rather cartoonish actually.  My opinions aside, it did rather well at the box office for its time as well with a very healthy $36 million dollar pull in at cinema’s making it the pretty darn huge for that year!