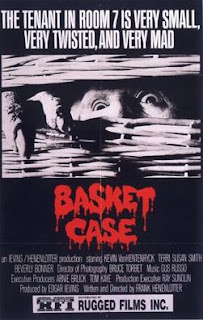 Well, Basket Case is certainly a strange little film. Somehow I’d managed to live my entire adult life (I’ve hit middle age now) without having seen this film. Originally released in 1982 I gather it didn’t do anything special at the box office. It was however, one of the first ever horror films released on the then revolutionary format of VHS. I guess being one of the only horror films at the time to get a home video release it got an artificial boost of sorts and became a bit of a cult classic from there.

Personally, I actually quite like this film. I don’t know yet if it will become an all time classic of mine but I’ll definitely go back and rewatch this film to see what it holds a 2nd time around.

THE PLOT OF BASKET CASE

The plot focus’ in on young Dwayne Bradley who has just moved to the big city with his little brother, Belial (who inhabits a basket). Dwayne manages to find them a shithole flat in New York. Dwayne is relatively normal whilst his brother is his conjoined twin who is unfortunately the looser in the genetic sweepstakes  of life. He was separated from Dwayne at birth, and subsequently discarded like a sack of genetic waste (which he pretty much was). As it turns out, Belial doesn’t die and manages to survive with the help of his congenital twin and live in a basket which Dwayne carries around.

Basket Case uses a then revolutionary technique knows as stop motion animation (also employed in Evil Dead). While it may or may not hold up now it was state of the art at the time. Back to the plot of the film. Dwayne starts to meet ladies and socialise in New York whilst Belial is resigned to life in a basket and obviously frustration mounts and as a result he starts a murderous rampage.

I have to say I really enjoyed this film. It kept my interest throughout the whole affair. Whilst there are some cheesy bits its overall pretty cool. There’s some decent amounts of horror and gore in this one. I’d recommend it to any horror fan to at least watch once. It does have a certain charm which is hard to put your finger on but still retains a certain ‘campness’ that many B grade films are known for.

Anyway the film is up on You Tube so you an stream it from here!