Macabre is an Indonesian horror flick. I was unaware they had any sort of film industry there let alone a horror scene.  I have to say this one isn’t bad. In fact I was quite impressed with it! Especially since this one was bought on a punt. 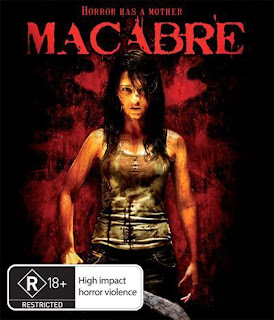 The plot focus in on a group of tourists, who seem to be of mixed decent (either Indian or south east Asian). They decide to go on a break in Indonesia and let their hair down a little. The crew have a great time with a few drinks etc. Just good wholesome fun, before they decide to call it a day on the partying.

On the drive back from a bar they meet a young attractive woman by the side of the road who says she’d been robbed. No cause for alarm there. The friends decide to pick her up and take her back home. Her family are obviously glad to see her returned alive and thank the friends for their kindness by offering them a place to rest and a hearty meal.

This is where the plot thickens and it turns out the family are a murderous gang of butchers who on sell human meat to the wealthy elite.

THE VERDICT ON MACABRE

I won’t say the plot to Macabre is fairly predictable. It does start out a little ‘paint by numbers’ but as the movie progresses we do get a couple of nice twists in it. It is quite entertaining and the gore / violence levels are quite high, grim in parts actually. The plot contained within Macabre allows for some quite full-on gore/bloodshed. Horror effects in this one are quite realistic adding well to the brutality of the movie.

One thing that may deter watchers is the fact that the film is not in English. it does have English subtitles though. The plot isn’t that complicated so once the gang are in the house and it’s evident what’s going on you really don’t need to focus too hard on the subs. The visual aspects of the film more or less keep it going.

Overall the camera work and production is pretty cool. The movie doesn’t feel slapped together at all. The plot is simple enough that you don’t have to focus too hard on what’s going on, and the violence is quite full on. Enough to keep most gore-hounds happy! I’m glad I took the punt on this one!

Anyway if you do see this around or can download it, its defs worth a watch.

Be sure to keep checking back on https://www.gorenography.com for more great movie reviews.