Its a quiet Saturday night in for me this week and I thought I’d put one something easier on the senses so I dragged out an old VHS copy of FRANKENSTEIN. 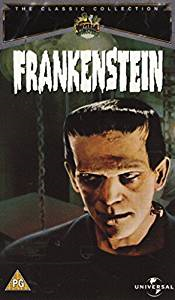 Since writing this blog I’ve gained an appreciation for the horror classics. I have to say out of all the golden era (20s and 30s period) this is probably my favorite. This is one movie I have to say really works well on the VHS format. The picture probably wasn’t shot in anything more high definition than a tape would have been and the analogue tape format really carries the soundtrack and dialogue of the film well.

I’m sure we all have a fair idea of the plot or have at least read the book so there’s no huge necessity for me to outline the plot again. Boris Karloff (see also The Mummy) once again is cast as the creature.  I’m not familiar with anyone else acting in the film, but they all do a great job too. Movies such as this one rely on dialogue and the interplay with light/shadows on the film. Of course the soundtrack is important too and a great job is done in all areas.

THE VERDICT ON FRANKENSTEIN

Production values aside on Frankenstein it rolls along nicely as a film. The visual quality seems ahead of the other monster films of the time and doesn’t feel as slow paced as some of the other films of the generation. I have to say I thoroughly enjoyed it the whole way through. Another point to mention is that Frankenstein’s monster is not an ambitious task to recreate with the technology of the time.  Some of the creatures (universal monsters) look quite comical now where as in this case the monster is quite believable.

As with most films of this era there’s no real gore or graphic violence so you can watch it with your younger children or elderly parents without the fear of upsetting anyone. I couldn’t find a free online version of it but its available to stream on You Tube.  I’m sure you won’t have too much trouble finding it at a second hand store or Ebay or something.

For more great movie reviews be sure to check out https://www.gorenography.com regularly!