I have to confess I haven’t seen the original Japanese version of The Ring (directed only a few years earlier). After watching this one I’ll definitely get around to it sometime soon (I have the Ring O prequel to watch as well). This film is a genuinely thrilling and suspenseful ride. Australian actress Naomi Watts as lead character Rachel looks stunning in this. Everyone does a great job in acting their parts so theirs no real complaints here to level at the film makers. 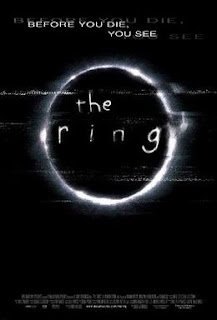 There’s no real gore or horror perse in this movie either which means it has to rely on direction and a solid plot both of which it has in ample quantities.

The plot itself revolves around a video tape which has been circulating for a while now and whoever watches it dies after 7 days. The last two victims being Rachel’s niece and her boyfriend. Obviously Rachel doesn’t believe in the curse that the VHS tape carries but starts investigating the case. She does start backtracking the events that led up to the death of her niece. Investigations lead her to a cabin her niece and friends shared on the night she viewed the tape and of course Rachel ends up watching the tape as well. The then asks her ex partner for advice about the tape and of course he ends up watching it thus numbering his days as well.

As investigations continue the VHS starts manifesting itself into real life which is when Rachel realises she’s got some big problems ahead of her. The race to get to the bottom of the cursed tape starts. Some great plot twists ensure the movie keeps you on the edge of your seat the whole way through. Of course I won’t spoil those bits for you so you’ll just have to watch it for yourself!

THE VERDICT ON THE RING

Anyway I thought this was quite a well done film. The acting as mentioned above is great and the production values are rather solid too. I would have no problems recommending it to anyone. And if nothing else I did learn a little more about the VHS format I grew up watching horror movies on!

For more great horror movies be sure to check out https://www.gorenography.com.