>
As I jammed Day of the Dead Contagium into the DVD player I sat down with beer in hand eagerly awaiting another chapter in Romero’s  “…Dead” series. Luckily I bought this one for a couple of dollars at a flea market. Only a few minutes into the film I realised I’d been duped. 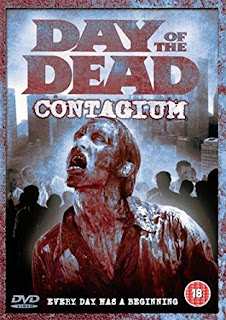 Basically its either a blatent rip off or a poorly executed tribute to George Romero. The Day of the Dead logo is used (or ripped off) leading one to believe its an official part of Romero’s franchise. The cover art is also presented in the same style as “Day of the Dead”. This is presented as a prequel of sorts to the cult classic.
The “Acting” in this film is woeful. No body in the cast displays any redeeming qualities. Now I think about it, I don’t recall seeing any of these people before or since this film. Safe to say the dead really do have a better chance of coming back to life than these poor peoples acting careers.

THE “PLOT” OF DAY OF THE DEAD: CONTAGIUM

There is a plot of sorts.  I have no idea really how much of a plot, as much of it didn’t make any sense anyway. ***many details to me just seemed to me to be out of time-line flow anachorisms IE: how did they have video calling in a movie that was meant to have taken place before DAY OF THE DEAD?*** .  I just couldn’t focus on it. The movie just annoyed me, so I decided to drink more beer instead. There are some half reasonable special effects  and a lot of shithouse special effects which come across as cheap and half arsed.  Later on in the film the quality of gore and zombies does improve to the point where its actually *somewhat* reasonable, but unfortunately that alone does not make a movie make.

Overall best avoid Day of the Dead Contagium. There are lots of other much higher quality zombie flicks to get before you worry about wasting time and money on this one. Even some of the other shit ones (zombie women of satan, troma films etc….)  at least throw in some laughs or female nudity.  This has no real redeeming qualities at all.
For more great horror movie reviews be sure to check out https://www.gorenography.com.