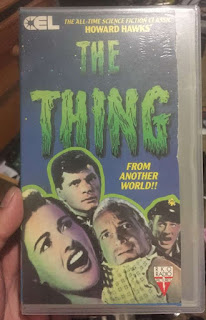 The full title for this one is THE THING FROM ANOTHER WORLD.  I’ve never really heard it referred to as that, so I’ll call it “The Thing”. It’s essentially an adaptation of a short story called ‘Who goes there?” from the 30’s. This movie was later done again by master horror director John Carpenter in 1982.

The plot revolves around a military operation in the north pole concerning a UFO that went down in the artic. Upon investigation, the crew accidentally blow up the craft but find the frozen remains of the alien nearby an take it back to the base for testing.

The “Thing” thaws out faster than they’d anticipated and escapes the military facility and slaughters a couple of military dogs in the snow.  The dogs manage to remove an arm off the “thing” which is taken back to be tested. Upon testing it is determined the arm belongs to a creature not of this world composed of materials closer to plant life than human flesh and blood. However the “Thing” can change shape and mimic humans which it does and then its up to the rest of the defence force personnel on the base to stop the thing before it wastes them.

VERDICT ON THE THING

The movie itself is quite reasonable when considering it is a B & W feature directed in the early 50s. I have to say I found it quite enjoyable for what it is. Unfortunately, it doesn’t stand up against the later version done by John Carpenter (which I’d already seen). Like many movies of this era, I still think it’s worth watching, if only as a historical reference. And of course, to see how far Carpenter took his version of the film. I should also qualify this by admitting I’m not a huge fan of science fiction.

This film was rated the best sci-fi of its year and is quite highly regarded.  I Just found it a little slow going. The film itself has very little horror. Let’s face it most films of the time were sparse on the horror. It also would have been cool to see the “Thing” a little more (though I guess the special FX standards of the time wouldn’t have done it justice). This is by no means a bad film, I was just a little underwhelmed by it after having seen the 1982 version.