NIGHT OF THE LIVING DEAD

Night of the Living Dead is George Romero’s ground breaking zombie flick from 1968. It is the measuring stick by which all other zombie films are now judged. It’s creator George A Romero is credited as the inventor of the modern day zombie. This movie is assured of its place in horror film history. 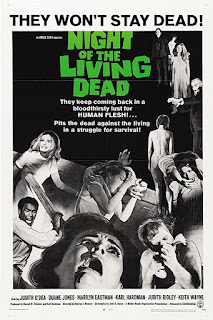 Shot on Black and White film, and filmed on what can only be described as a shoe-string budget this film is singlehandedly responsible for bringing zombies as we know them today  (as opposed to the haitian/voodoo zombies in movies like White Zombie that had previously been depicted in movies until then) into the mainstream of modern culture. NOTLD spawned countless zombie films just like it. Some better and many immeasurably worse. It is also the earliest film I can think of that uses explicit gore, levels of gore which now have been rendered “cute” by todays standards but were revolutionary by late 60’s standards.

Basically the plot revolves around a scenario where the dead are coming back to life and a small group of survivors are trapped in a farmhouse left to defend themselves with whatever weapons they can find, while the undead around them are literally “chomping at the bit” to take a bite out of them.

While much of  it now would be considered outdated. The special effects used rather plain. All that aside this is still quite a watchable film and something that you could use to introduce your kids to the world of horror without traumatizing them. Featuring a much played down version of the over the top gore that the following films in the franchise (Day of the Dead, Dawn of the Dead etc….) were renowned for, this can probably be considered one of the safer films for the horror newbie. Hardened gore-fiends might find the pace of this one a bit slow.
On a side note: If you can find one of the more ‘premium’ versions of this film with the making of documentary as an extra its also definitely worth finding … It explains how Romero and Savini created the film using a cast of largely volunteers and novices (the zombies) and the special effects created on the almost anorexic budget the guys were working with.  This is almost as entertaining as the film itself!

Over all Night of the Living Dead a great watch. The musical score to this is actually quite good too. Its only on repeated watches I realised exactly how good it was. The acting is also quite good. I mean lets be realistic the zombie parts wouldn’t have been hard to act, but the actors, whilst having no major name actors seemed to carry themselves quite well. Nothing in this film falls short I have to say.
I feel it is historically important to gain an understanding where the zombie infection first took a hold on mainstream cinema audiences. The movie itself I hear didn’t do awfully well at the box office. To be fair it didn’t really have to as only $114,000 was spent on making the film, so the $12million box office takings paid off the initial investment many times over. NOTLD did gain a cult following over the years. This in some ways was aided by a copyright issue with the film. The owners of the film never renewed the rights to the movie. This meant that the film fell into the public domain. This means that every movie duplicator or distributor could disseminate copies at will, without permission or having to pay royalties. Which many did. I guess with that many copies of a great film floating around, it had to take off! I whole heartedly recommend every horror fan watch this film.
It is presented below in all its glory on you tube for those that haven’t had the pleasure! if you can get yourself a copy of the original (there are some great prints going round) definitely do so!

For more great horror movie reviews be sure to check out https://www.gorenography.com on a regular basis