The Silence of the Lambs is a wonderful movie for a few reasons. It is expertly shot, produced, and sequenced. For my money it really holds the viewer gripped to their seat for the entire length of the movie. At no point is the viewer feeling like the pace has slowed down or bored. The star power in this one is at peak levels with Anthony Hopkins starring along side Jodie Foster as the Psychopathic Dr. Hannibal Lecter and Clarise Starling respectively. 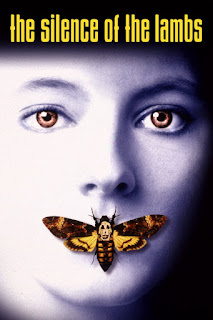 Secondly the film gets into the mind of serial killer like no other movie I’ve ever seen. I haven’t read the book, so I can’t tell you if it was author Tom Harris’ knowledge of the killers’ psyche or if the movie producers took it to a new level. Either way they’ve really connected the viewer to the mind of the serial killer with Hopkins’ character Hannibal Lecter.

The plot revolves around a young FBI agent (nearing the end of her training) Starling, who is obviously standing out from the current crop of students and is asked to talk to long time incarcerated serial killer / cannibal and psychologist Hannibal Lecter. The FBI hope she will pick his brain about a new killer who they can’t track down. Hannibal is as mentioned above a psychologist by trade and an expert in getting inside peoples psyche and a master manipulator. None of the other FBI agents have been able to get anything out of him but Clarise manages to find a soft spot in Dr. Lecter. He helps her out in a cryptic round about way which leaves Clarise to have to get to the bottom of both Lecters clues and the serial killer before he kills his latest victim.

THE VERDICT ON SILENCE OF THE LAMBS

The Silence of the Lambs is one of those films that anyone into horror really needs to watch. It does have a reasonable amount of gore and violence but focuses in more on the psychological aspects of murder. It’s probably closer to a thriller than a horror movie, but either way the quality of this film will appeal far beyond the base of horror fiends. It is a staple in many mainstream movie fans list of favorate movies.

For more great movie reviews be sure to check out https://www.gorenography.com on a regular basis