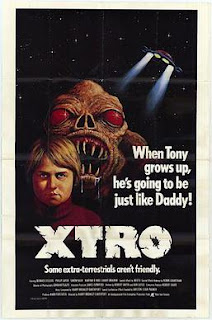 Xtro is one film that I’ve been waiting a long time to get my hands on. Considered a cult classic I was excited to finally get my hands on a VHS copy of this bad boy! This one sits halfway between sci-fi and horror and would probably appeal to both crowds.

The plot focuses on a young boy, Tony whose dad is abducted by aliens. He’s struggling to deal with it obviously and longs for the return of this dad. Meanwhile, a strange alien creature is lurking in the countryside. It attacks innocent humans and on the second occasion impregnating them with its alien embryo.

The title “Xtro” to me suggests the film was meant to cash in on the wave of publicity and interest in sci-fi garnered by Stephen Spielberg’s film ET. This one however is not family viewing and more aimed at the seasoned horror fan. The gore factor is pretty high. It’s quite impactful especially the scene where the woman who was raped by the alien gives birth to a full sized version of Tony’s missing dad!

Tony’s dad is not the same as he was however this becomes apparent in a gruesome chain of events that I won’t spoil for you. Regardless, it’s good squeamish fun!

THE VERDICT ON XTRO

Xtro as a film itself is quite watchable. It would definitely be considered a cult classic in my books. It apparently got canned by critics at the time, but this time I’m going to have to disagree and say I think it’s a B Grade classic. It’s well shot and keeps the viewer interested the whole way through the film. Being an English production the pommie accents dominate the film and old school ‘Moog’ type synthesizer sounds really ad a creepy atmosphere to the proceedings.

for more great horror movie reviews be sure to check out https://www.gorenography.com on a regular basis!