Hostel is an interesting one. I’d seen this when it first came out and to be honest I didn’t think that much of it. To put it in perspective, in 2005 when this film came out, I was already a long-time horror fan. This was one of the most extreme things I’d ever seen. I was more a fan of the 80’s style horror. That was years ago, and I’d already started to get sick of the newer style of horror that was coming out. This just seemed like needless violence for the sake of it.

Fast forward, 13 years, after having a few beers at a friends’ house he chucked the movie back on and I thought “Why not give it another shot?” and I’m glad I did. I saw a lot of things in this I missed the first time around. 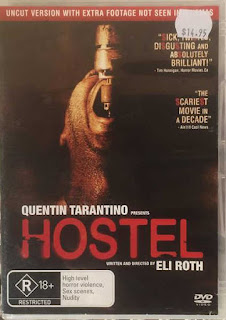 Hostel was important for a few reasons. It is credited as starting off the “torture porn” genre of horror films. It’s not to say that it’s particularly more extreme than many of the other films reviewed here that came before it, but it did drag the more extreme end of horror out into the mainstream. Whereas before (from my memories) this level of gore or violence was more at the underground subculture level of horror. This I guess was due to two things: The skill that the then-newcomer to the horror genre Eli Roth brought to the table, and the muscle that Quentin Tarantino’s production company would be able to throw behind it.

The plot itself is pretty well thought out and well written as well. Revolving around a group of university students that take a backpacking holiday in Eastern Block Europe (Amsterdam, Slovakia, Romania etc). Partying, drinking, and carrying on like most young backpackers would do. During their travels, they meet other like-minded young adults. After a night of partying one of them (Oli) goes missing. While the others stick around to see if they can figure out what happened to their friend they too are drugged and abducted into a strange organized crime ring. A ring where wealthy businessmen pay large sums of money to torture and kill people for little more than sport.

THE VERDICT ON HOSTEL

What follows is a litany of torture and mutilation the likes of which all but the hardcore horror fans would have yet to have been exposed to. The gore is graphic and sadistic which will keep almost any gore fiend happy.  More importantly, it is a well written and rather watchable film. It holds belief for the viewer (unless of course gore upsets you) but I’d recommend Hostel to any seasoned fan of horror or those not easily offended.

for more great horror movies be sure to check out https://www.gorenography.com on a regular basis.