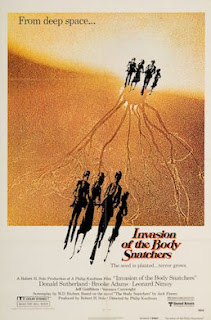 Invasion of the Body Snatchers. I have to admit, I’d never seen before. Not this version or the original. Whilst obviously I can’t comment on the original or much less the book that came before that, his is a great film in its own right. A film that keeps your interest the whole way through from start to finish. Some big names in this, who both deliver pretty solid performances in my opinion. It stars Donald Sutherland and Jeff Goldblum (the Fly remake, Jurassic Park etc…) and the one and only Leonard Nimoy (Dr. Spock of Star Trek fame).  It’s not too high on the gore so you could really show it to younger horror fans as well so it could be a bit of fun for the whole family. This one sits halfway between horror and science fiction but should appeal to both crowds equally.

The plot itself revolves around a strange goo like substance that attaches itself to plants and grows some mighty strange flowers. I’m not sure if its spores that attack the humans and eventually kill them or there’s something I missed in the plot. Either way the plant like creature is killing off humans and growing replacements for them which it then tries to assimilate back into society. The only problem is that the humans are not the same mentally, appearing to be distant and not themselves to anyone that knows them.

Its not long before one of the central characters Elizabeth, discovers her boy friend / fiance is not himself and enlists the help of a few friends including heath board official (Sutherland) and his friend (Goldblum) and a psychiatrist (Nimoy) who stumble on to the truth that the alien plants have started replacing humans and have to find a way to stop this before the invasion takes a hold on the human population as a whole.

I don’t know if I’d go so far as to say Invasion of the Body Snatchers is an all time classic of either the horror or the sci-fi genre but at the end of the day it was rather enjoyable and a great way to spend a couple of hours. I would recommend it to everyone who considers themselves a horror or sci-fi fan.

For more great horror movie reviews and other stuff be sure to check out https://www.gorenography.com on a regular basis!