Plot wise it follows on from the first movie with a new family that has moved into the Thompson house on Elm St. This is set fairly closely after the events of the first movie had taken place. Obviously I’m assuming if you’re reading this you’ve seen the previous movie (but if not check out our article on it here). Jesse a teenage boy is having some disturbing nightmares centre-ing in on an unknown character who is trying to get Jesse to do his killing for him. After learning of the horrid past of the house they’ve just moved into from another student at school, Jesse and his love interest Lisa do some research into the house. They find Nancy’s diary left there and realise it is the same creature haunting his dreams that caused so  much bloodshed in the first movie, Freddy Krueger. 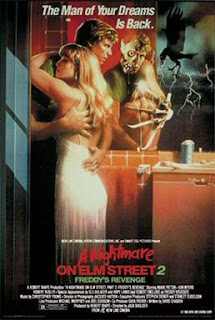 Freddy is back. He’s again forcing his way into the real world through the dreams of Jesse. This movie takes on a more ‘fantasy’ like approach to proceedings. It allows more emphasis to be placed on the Freddy character than in the first movie. This has the 3 fold effect of allowing for more creative horror effects and the building of another completely different realm within the dreams which can be explored in this film and the subsequent sequels that followed it. Also opening up the character of Freddy allows the viewer to build a relationship with the iconic character. It’s here that you see Krueger’s wit start to take the forefront as well. His witty one liners taking a more visible role in the film.

Similar to the first film Jesse is afraid to sleep for fear of the nightmare to make its way into reality. The body count starts to mount and it is up to Jesse to stop the dreams and with it, Freddy Krueger

THE VERDICT ON A NIGHTMARE ON ELM STREET 2

As a teenager, I didn’t like A Nightmare on Elm Street 2  as much as the first one. I didn’t think it compared to the subsequent sequels either when I saw it back then. Through the magic of DVD re-releases I’ve been able to go back and give it another watch. This time, through older eyes and I have to say I really liked it. Obviously, its not directed by Wes Craven but I think the film holds up well. It follows on from the first quite nicely. Seems I wasn’t the only one who liked it as it managed to surpass the original in terms of box office success as well ($40mil at box office). It also paved the way for a raft of successful sequels. The movie itself has gone on to be a staple part in what is one of the most successful horror franchises of all time.

Anyway track it down for yourself and give it a watch. There’s an 8 pack DVD release which I’ve treated myself to. It’s a great way to get the whole series in one hit for a reasonable price. It also comes with a neat little doco about the series. Either way you should be able to get quiet easily online.

For more great movies and reviews be sure to check out https://www.gorenography.com on a regular basis!