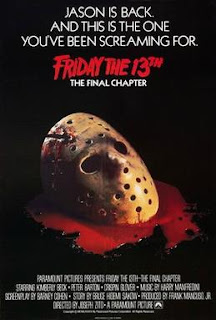 One of the biggest horror franchises in history returns for another trip around the block. The movie opens with another recap of the last movie where Jason is carted off to the morgue. Another group of over sexed teenagers descend on to Camp Crystal Lake to party and carry on as they do in these films. Among the usual assortment of teenagers, another family takes up residency there with a young Corey Feldman as Tommy the 12 year old kid of the family.

The box office takings from the third installment were surprisingly good. So good in fact, that Jason somehow resurrects himself from the massive injuries and escapes from the morgue to start wreaking havoc on Crystal Lake once again in Friday the 13th part 4. There’s no doubting the powers of a massive box office pull to resurrect the dead!

If you can suspend disbelief long enough to believe that he could recover get through that, what you have is a quite enjoyable teenage slasher film in the tradition of the 3 that preceded it. Heaps of attractive females and some cool killings keep things moving along nicely. Despite the sarcastic tone of this paragraph, I have to say I did enjoy this movie and would again recommend to any fans of the first 3 movies. If you haven’t seen a friday the 13th film, I’d suggest you go back to the beginning and start from there. This is one series that’s much more enjoyable in chronological order.

Anyway you guys have a great friday 13th whatever you’re doing. If you’re looking for more horror reviews always check out https://www.gorenography.com.