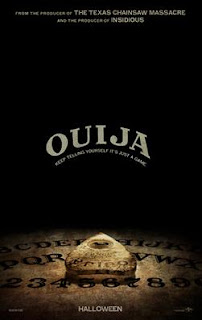 Ouija is a neat little film! I didn’t hold too much hope for it as it had copped some negative reviews on the net.  I have to say I really liked it. I’m going against the majority vote on this one! Ouija is probably more a thriller (or a supernatural thriller) than a gore flick, but there are some cool horror effects to be seen as the film progresses. After a slow-ish beginning things do ramp up and I have to say it kept me on the edge of my seat. It even provided this seasoned horror veteran with a few jumps and that unnerving feeling of having watched a genuinely scary flick.

The film centers around two now teenage girls, Laine and Debbie. The two are long time inseparable best friends. Both seem to have everything going for them. Debbie inexplicably kills herself one afternoon after a period of acting a little strange. Laine is not convinced Debbie killed herself and suspects that Debbie had been messing around with an Ouija board and decides to investigate. She and her friends begin using the board with the hopes of calling up Debbie and finding out what happened but inadvertently summon up a more malevolent entity. That’s probably about as far as I can go without ruining the plot for you, dear reader. It’s just one of those storylines where you don’t want to know too much going in.

THE VERDICT ON OUIJA

The plot does have some neat twists and a few good scares. As a film, it’s quite well shot and flows well. The actors all put in convincing performances, nothing seemed hammy. This one kept my interest throughout the duration of the film. Due to the nature of the film, I don’t know how it would hold up to repeated viewings but overall I enjoyed it! Definitely recommend!

*NOTE: I’ve since given this a repeat viewing and yes, it held up quite well*