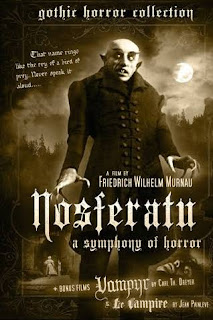 Now we’re going right back to the start of Horror cinema. Nosferatu!

I have to say this took me a couple of attempts to get into the right headspace to sit and watch this film. When I finally got my head right to sit down and appreciate it it was well worth it.

Some interesting background on this film was that while it was based on Bram Stokers “Dracula” it never gained legal rights to do so. Instead of using the words vampire they are referred to as “Nosferatu” and instead of using the name Dracula they called the main villain “Count Orlok”. They were still sued and as a result of copyright infringement all copies of the film were ordered to be destroyed. Thankfully at least a few must have survived for the movie to have remained in circulation until the digital age we now find ourselves in.

THE PLOT OF NOSFERATU

NOTE: I’m going to go into more detail with this plot as I’m sure any fan of the genre pretty much knows the story of Bram Stokers Dracula anyway. It’s by no means a comprehensive outline of the plot, lest it would become an essay length blog entry. If you would rather no spoilers, skip the next paragraph.

Nosferatu follows the story of a young real estate agent, “Hutter”. Hutter is acquiring real estate in England  for the wealthy Transylvanian Count Orlok. As the commissions on the property deal will be big, he is asked to travel to Carpathia (In Transylvania) to see the Count in person.  As he gets close to the Count’s abode the tour guides refuse to go any further. He does not take this as a warning. Instead, young hutter presses on to visit the count.

Upon entering the castle he dines with the Count and cuts his finger, which stirs up a blood lust within the count. The Count gives in to his urges and sucks the blood dripping from Hutter’s finger. It’s then Hutter realizes things are getting strange. Despite this, Hutter stays in the house and is bitten in his sleep by the Nosferatu. He starts to fall under the spell of the Count.

Hutter’s betrothed, Eilleen who is still back in England also falls under the spell of the Nosferatu from across the seas. Orlok is then transported to England via sea vessel (a plague he is carrying kills most of the crewmembers and starts to spread onto the mainland).

Meanwhile, Hutter tries to escape the Castle but hits his head and is found by the villagers who keep him in an infirmary to rest him up. This wastes valuable time and giving the Count a great headstart. Hutter eventually recovers and sets sail back home.  Upon his return he finds England ravaged by a plague which the Nosferatu has unleashed on the town. Count Orlok is keen to sink his teeth into Hutter’s fiancé,  but Eileen has read in a forbidden tome that the way to defeat a vampire is to keep him distracted by feminine beauty until the sun comes up. The beautiful Eileen succeeds (by default) with her plan. The Count vapourises into dust and the curse he’s brought with him is nullified.

The movie itself is primitive and has no dialogue. You can see the stuttering of the frames. The film is shot in Black and White / Sepia and in some places seems to have a strange green hue to it (I’m not sure if the restoration process did this or the original film or some sort of film decay).  The accompanying music is a recreation as the original score had been lost in time. Therein lies the charm of this film. The music that accompanies this film is quite hypnotic and otherworldly in its own way and adds to the atmosphere of the film. Scenes are cut with script text laid out in old-style gothic script which does help a lot, but also adds to the arcane feeling of this film. Like I said it did take me a while to get into the headspace required to appreciate this work, but I’m glad I did. I have a sneaky feeling this is the film that will spark a new interest in vintage horror for me (Note: it most certainly DID!).

Anyway here’s a really neat, HD version of the film I’ve found on YouTube for your enjoyment so check it out!