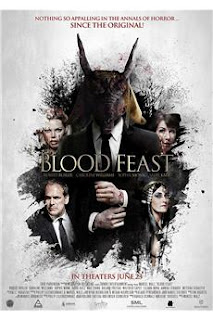 It’s easy to say “Groan. Not another remake of a film that didn’t need to be remade”. Lets face it Blood Feast 2016 doesn’t have a lot to live up to. While the original Blood Feast from 1963 raised (or lowered depending on how you look at it) the bar for cinematic depictions of gore, it was hardly a cinematic masterpiece.

Blood Feast 2016 has a few things going for it. It’s quite reasonably shot and produced. As a stand-alone movie it’s not too bad at all. The gore effects are really well done as well. This might put it at odds with fans of the original film. 1963s Blood Feast was a B Grade explosion of hammy acting, and gore. The likes of which had never been seen before.

One question I know you’re all going to ask is “How is the gore in this film?” With this version the gore is stepped up again. There’s some definitely cringeworthy moments for even seasoned horror fans in this one.  It s a lot more convincing than the original. I would have to say it builds into one of the more extreme climaxes out there.

The plot is a little different featuring of course Ramses who in this movie is running a little American Style diner in France and financially struggling. He works a night job at the museum with the hopes of pulling himself out of debt. Obviously working two jobs is stressful and things are getting a bit much for poor old Ramses and he loses his medication and starts seeing visions of the ancient Egyptian goddess Ishtar. Ramses then sets about to hold a “Blood Feast”, a cannibalistic ritual feast in the hopes of resurrecting and then becoming one with the goddess Ishtar.

Ramses has a family, not the least of whom is his daughter played by the stunning Sophie Monk (a definite plus for this film). He hopes his family will join him for the climactic crescendo of blood and meat.

THE VERDICT ON BLOOD FEAST 2016

Overall I quite enjoyed this film and while I don’t get precious about remakes this one really didn’t have that much to live up to anyway. In some ways it surpassed the original. In other ways it didn’t have the same punch as the original would have had. It IS however immensely more watchable for people who don’t get the old school horror. Lets face it most of us weren’t born when the original came out.  For that it could be a useful tool in introducing a new generation of gore fans to some *cough* classic horror.

For more great horror flicks be sure to check out https://www.gorenography.com on a regular basis!