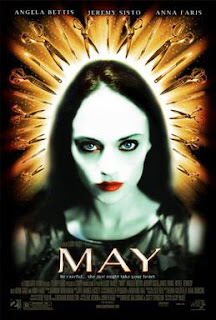 Oh man! May was something else!

I hadn’t heard anything about the film (not even sure I’d heard of the film) before viewing it, but got it from a friend of mine with highest recommendations. She had said before that it started out a bit like a ‘chick flick’ and degenerated into a full on horror movie from there. She wasn’t wrong

The film itself centers around May, who is an awkward and socially mal-adjusted young lady. May has no self confidence and has never had a boyfriend (or maybe never had any real friends) and upon meeting a boy for the first time she becomes obsessed by him. He of course freaks out and dumps her. May then takes things to the next level to be with her man. This is where it gets hard to describe anything further in the movie for fear of ruining the movie for you guys.

May is perfectly cast by a young woman I’d never heard of before (Angela Bettis)… she is creepy, introspective and morbidly obsessed with the idea of finding companionship. Her performance really allows the viewer to feel for her, and in my case fall for her a little.

Overall I found the film rather fun to watch and captivating from start to finish… Its not a big budget affair but rather well shot and executed. I have no complaints about this film at all…. the gore levels are high enough to keep most gore-hounds happy with proceedings while the story more than holds up on its own. All in all “May” is one creeeeepy film!

For more great movies be sure to check out https://www.gorenography.com on a regular basis!