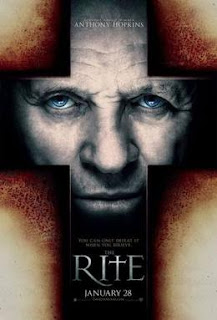 Rite is a pretty cool film. It’s well written and well executed. The DVD jacket says it’s the best exorcist film since “the Exorcist” itself. Big call. Does it live up to those claims? I’d have to say no. It’s still a pretty cool little film and does bring another angle on the exorcism theme. The film THE EXORCIST is a very harsh and jarring experience with some quite disturbing scenes, this movie while no cake walk, is  a great watch is a little easier going on the senses. It might be an easier watch for those newer to the horror genre.

THE PLOT OF RITE

Rite revolves around Michael, a young would be priest who has completed 4 years of study. Not because he is a faithful catholic but wanted a free ride though college at the churches expense. Then on completion, he declines to take  up service as a priest. He is then threatened with liability for the study costs but given an option to attend the Vatican after a chaplain identifies a need for the church to have more exorcists on hand after rising numbers of  ‘incidents’. He decides to take up the offer and go to Rome (Vatican city) to study as an exorcist and is taken under charge of Father Lucas (Anthony Hopkins), a veteran exorcist, to view and hopefully rid a young woman of her demons.

This is more of a thriller than just a standard horror flick. It also raises issues of faith and belief when young Michael discovers there’s a lot more to what’s going on than science can explain. The movie itself has been well researched and the Latin dialogue during the rites of exorcism come across rather genuine. Overall this is a pretty cool film and definitely worth the time to watch.