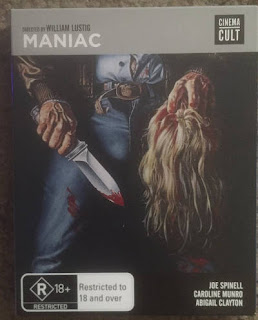 To be honest I’d only heard about Maniac after reading the “Video Nasties” list. The notorious list of movies that got banned from the UK due to their explicit horror content.

The film revolves around a deranged serial killer with mommy issues, Frank who is striking fear into the hearts of the New York City residents after a series of his murders go unsolved. Frank obviously has issues separating reality and fantasy and his apartment is littered with mannequins with whom he has deluded himself that he is carrying on a relationship.

I could probably over analyze this film and say that Frank has the similar sexual retardation as many horror movie villains (such as Jason Vorhees). He then takes it out on his attractive female victims. But really this film isn’t a thinker. It does however attempt to dwell into the psychology behind the serial killer. For that reason it still holds up to some degree today. I’m going to say this is more firmly rooted in the B Grade Genre. I don’t want to attribute any brilliance to it that wasn’t there. Not to say it’s a bad film either, it’s quite watchable, and enjoyable. Maniac is solid, but by no means a classic. The gore was reasonably full-on for the era (but there was way more extreme films around by 1980) which was overseen by the one and only Tom Savini.

I got a reprint of Maniac, but I hear the currently available versions of this film are quite expensive. If you’re on a budget there are a lot of films you should get before this one. If you see it cheap or have a lot of money to blow on BLURAYS its not a bad addition to the collection. And for collectors, it is. As I’m sure the main audience for this film now days would be the horror collector market.

for more great horror movie reviews be sure to check out https://www.gorenography.com on a regular basis