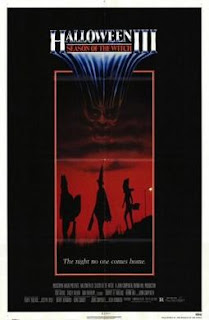 Ahh, Halloween 3. The much-maligned third installment of the “Halloween” franchise.

My understanding of the affairs surrounding the original Halloween was that the Mike Myers story was supposed to be a once-off. The franchise itself was supposed to have been a collection of creepy stories surrounding the idea of Halloween. After the success of John Carpenters’ original film of course of the lure of easy sequel money became too much and Halloween 2 was produced (much to Carpenters dismay). But this one sees Carpenter return to the franchise in an effort to reprise his original vision of different and unconnected stories connected by the Halloween theme. The only problem was that the Mike Myers character had become so popular that this film bombed spectacularly at the box office and incited the wrath of horror movie fans the world over for the sole reason of not having anything to do with Michael Myers.

Is this a bad film? No! It’s actually a pretty good film (as with all Carpenter films). It’s actually quite an engaging story if you can get past the fact that Michael Myers isn’t in it. History has proven Carpenter right to some degree as the movie is now held in high regard amongst horror buffs. In another way maybe it’s good the movie didn’t do as well as it should have. The studio was then forced to go back to Michael Myers led stories.

THE PLOT OF HALLOWEEN 3

Basically the film revolves around the central character Dan (Tom Atkins). Dan is investigating the death of a patient in hospital in the few days before Halloween, who was killed by what was then thought to be a crazy person. No answers could be found as the suspect killed himself shortly after in the car park. Dan teams up with the murdered guy’s daughter and further investigations point to a mask factory,  The Silver Shamrock in a nearby town Santa Mira and a belief that ‘they’ are out to kill him. This kind of movie revolves around a detailed plot and I wouldn’t feel good going into too much detail for fear of ruining for you guys. Let’s just say something a lot stranger than a factory producing a few children’s mask is afoot.

Overall like I said Halloween 3 is a great film and engrossing from start to finish.  This one has a very similar feel to another of Carpenters films, They Live. If you can mentally disconnect yourself from the fact there’s no Michael Myers in it, it’s a great film! And now I’ve got that bloody jingle stuck in my head!

Also be sure to check out our reviews of Halloween and Halloween 2.