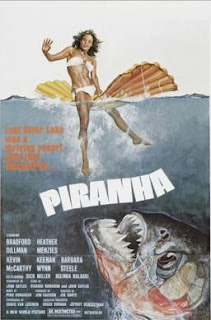 This is the original “Piranha” Produced by Roger Corman. Like many of Roger Corman’s films Piranha follows closely on the heels of the success of a major studio film, in this case, “JAWS”.  I honestly can’t remember if I’d seen this one back in the day (well my day anyway).  I’d seen the remakes and they were pretty cool, mindless fun. The remakes were high on the gore. They had some great CGI effects and plenty of exploitational violence and nudity. Now it’s time to see how the original compares to this.

The plot of Piranha itself revolves around an investigative journalist, Maggie and a local, Paul. the pair are investigating the disappearance of two teenagers (who have been eaten by piranhas). They break into an old army testing lab and find some strange experiments in the dormant labs. At this point, I have to say the creature effects on this are pretty cool. They meet an old doctor who was still lurking in the lab who informs them they’ve inadvertently unleashed the experimental piranhas into the water stream. Besides the odd camper that uses the river their major problem is stopping the infestation before it attacks an upstream summer camp and a big-budget water park due to open within days of the piranha being unleashed.

One by one the vicious little fish attack and devour anyone that is unfortunate to stick any limbs into the infested water streams.  I have to say after watching this one, my opinion of Roger Corman is a lot higher than it was before. This film is quite well shot and executed. The movie flows well and is overall rather enjoyable. Much better than Deathstalker! The horror effects and gore are at quite respectable (but not extreme) levels and it doesn’t look cheesy. Definitely worthy of a watch!

Overall, I was quite impressed with this offering from Mr. Corman!