>
Not sure whether Jason X was meant to be serious or more poking fun at the series. Maybe it was meant to be the final nail in the coffin of the Friday 13th series? Either way, it left me with a bitter taste in my mouth for some reason. 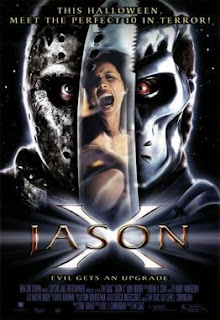 The movie had some potential and if it featured another villain  (like say someone we didn’t already know and love) this movie would have been quite reasonable as a veg-out watch or something to do when hungover.  Hell, it’s kinda fun, as far as B Grade horror goes. As far as a movie that befits one of the most iconic horror characters of all time it’s a definite fail.

Basically the plot revolves around a future team of space scientists in the year 2455 (yes the movie is set in the space of the future). They stumble upon a cryogenically frozen Jason Vorhees.Of course being from the future, they don’t know anything about the legend of Jason. They also find a would-be victim from the early 2000s and then proceed to thaw out the young victim who warns them about the potential horror Jason could unleash if brought back to life. The captain of the starship of course sniffs a few dollars out of Jason’s corpse and decides to keep it. As you can probably guess the frozen corpse of Jason thaws out and he comes back to life to wreak havoc on the space cruiser. I have to say the film is shot quite well and the horror / sci-fi effects are actually pretty cool. If only someone took some reasonable time, and spent some reasonable money on this film. It’s just that the plot is quite undigestable to anyone who’s followed the series.
The ship security team proceed to hunt down Jason on board the ship and blast him to kingdom come. Many times over. Which brings me to the next question, is Jason now immortal? He seems to regenerate at the drop of a hat (sort of like the liquid terminator in T2). Basically you can amputate limbs or shoot him in the head, and he falls over but regenerates within minutes to start killing again. This does not sit right with me. Again if this was another character I didn’t already know, maybe I could suspend disbelief but with Jason it’s hard.

Anyway Jason X is one of those “If you see it cheap” at a flea market or download it for free type things. Unless you’re a Friday 13th Collector, I wouldn’t pay big $$ for this film.  As I’ve said with other Friday 13th installments I really think it’s best you the viewer go back to the start of the franchise to really get a feel for the legend that is Jason Vorhees before you worry about watching this film. For a veg-out, it’s not too bad. As a worthy Friday the 13th, it doesn’t cut it. I don’t think I’m the only one that felt that way either. This really didn’t do anything amazing at the box office. Jason X Barely covering costs really. Maybe in a way, the box office verdict was the final nail in the franchises coffin.

For more great horror movie reviews and stuff be sure to check out https://www.gorenography.com on a regular basis!