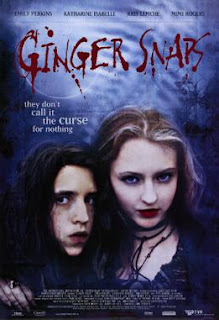 Well, Ginger Snaps was an interesting one. Another impulse purchase from the flea market. I’d never heard of the film but thought “What the hell. May as well take a punt on it.” This time it seems to have paid off.

This one revolves around the tribulations of two morbidly depressed, outcast teenage sisters, Ginger and Bridgette. The sisters while dark and introverted are tight and look out for each other. The town the two teenagers live in has fallen victim to the strange series of pet (dog) killings. As luck would have it Gingers period comes in while the pair are out and she is attacked by a feral dog which turns out to be a werewolf. Little by little the bite turns Ginger into monster. Her hormones take over bit by bit as the infection spreads through her body and she looses control of her sexual urges and develops a bloodlust that she can’t control.

Predictably Ginger starts having sex and spreads the infection amongst a series of violent attacks on her fellow students. It’s now up to Bridgette to stop her sisters violent spree.

Over all, I have to say I found Ginger Snaps quite enjoyable. I wouldn’t go so far as to call it a classic, or a particularly serious film, but the horror effects were quite well done. While it wasn’t over the top gore it should be enough to keep most horror fiends happy. More importantly it was decent film and kept me entertained through the duration of the movie.

Also worth noting the soundtrack is pretty rockin’ if you like late 90’s/2000’s mainstream metal with contributions from Fear Factory, Cradle of Filth, Machine Head and Soulfly amongst others of a similar ilk.

For more great horror movies be sure to check out https://www.gorenography.com on a regular basis.