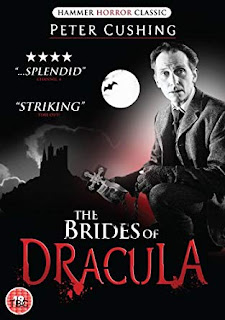 Well. time to explore the semi distant dark past of the horror industry with some “Hammer Horror” flicks. This time round I chose “Brides of Dracula”.

Hammer films were a British institution in horror circles. They managed to create (In my opinion, some might disagree) some rather classy films when compared with what was going on at the time in the horror world of the 1950s through to the 1970s.

This is set after Dracula’s death and revolves around the Baroness and young Marianne who is on her way to take up a job in Transylvania. of course the local coach driver who is still wary of the myths of Dracula that surround the region won’t proceed to Transylvania and drops her off at the local tavern. Marianne can’t find a room to stay so she takes refuge with a wealthy countess for the night. It becomes apparant she countess keeps her son in chains within the house. She claims he is mentally unwell, but Marianne’s curiosity gets the better of her and she meets him and finds him rather personable. It would appear the son is the heir apparent to the property and the countess is trying to keep him from claiming it. Marianne takes it upon herself to free the Countess’ Son.  Without realizing he’s a vampire.

Once loose the vampire is free to prey on the town folks. It is up to the Dr. Van Helsing (the vampire hunter of Dracula fame / played by horror icon Peter Cushing) who just happens to be passing through town and Marianne to stop him.

Overall Brides of Dracula is a well written and shot film. The violence levels are low so you can watching it with your horror loving offspring. Some more may find this movie a little “campy”, its definitely shot in that English drama style with a hint to Shakespeare. If you can deal with that its a pretty cool movie!

For more great horror movie reviews and news be sure to check out https://www.gorenography.com on a regular basis!