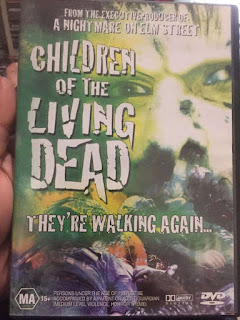 Children of the Living Dead is another attempt to cash in on the monumental legacy of “Night of the Living Dead”. This is what I would call “D Grade” horror, it could have easily made it into the realms of “B Grade” horror if the people involved had put a bit more work/time into it, especially with special effects maestro Tom Savini as part of the crew. The acting is a bit hammy (…well not just a bit…) most of the way through the film, but the zombies are quite reasonable and look fairly convincing. Tom Savini takes an early role in the film and also looks pretty convincing.

I’m going to be honest and say I’m not entirely sure what Children of the Living dead is even about, basically there’s zombies and stuff, but I got distracted by some off color production work, very unprofessional… the movie seemed in focus for a bit and then went an off color yellow … then back in and this, where I started to focus on finding fault with the movie rather than focusing in on what was going on.

As you could imagine .. I couldn’t make it through to the end so whatever… glad I didn’t pay much for this one (again it was a flea market punt) but it is a shame to see the “…Living Dead” name dragged through the mud and its also a shame to see Tom Savini wasting his time on such crap. I can’t honeslty give this one any kind of recommendation unless your some sort of “Living Dead” completist or you compulsively collect horror down to this level. Best avoid.

For more great horror movie reviews and other things be sure to check out https://www.gorenography.com on a regular basis!