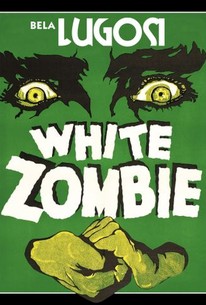 White Zombie is an amazing movie for a few reasons. Made in 1932 this one hails from the golden age of horror. Obviously any film this old is going to be primitive in nature but even to this day it holds up well. An immensely watchable film that has more than earned its place in cult film history.Shot in black and white and dating back to the 1930’s this is probably the earliest of the zombie flicks I have seen. No gore or special effects to speak of in this film, it has to rely on plot, dramatization, musical score and acting and it comes across as a very solid film even from the point of view of a modern (well 80’s horror fan) movie fan.

Plot wise this follows Neil, a young man who is moving up in the world and his soon to be wife Madeline on the island of Haiti. Upon arrival they are greeted by stories and a close encounter of the undead roaming the island at night and working in the sugar mills (Good to see someone smart enough to put those zombies to work… think of all that free labour going to waste in modern zombie films). What I like about the story line in this film is that it sits closer to the historical origin of zombies than the “Night of the living dead” style zombies, which is a pleasant change. Madeline has also unfortunately attracted the attention of Charles a wealthy businessman from the island who decides that since he can’t have her he will turn her into a zombie.

THE IMPORTANCE OF WHITE ZOMBIE

Overall a really cool film. It can look dated to many as a film but it is important to watch from a historical perspective as well. Going back to these kinds of films can give a new appreciation for the art of story telling and give the viewer an appreciation for how far horror films have come. Whilst the film remains in relative obscurity to most horror fans it was also a huge influence on heavy metal singer Rob Zombie who named his first band after the film. In fact it may well be more well known for that fact than its own merits as a film!

Luckily We’ve found a version of the film on youtube for you guys to check out!

Be sure to keep checking back on https://www.gorenography.com for more cool horror movie reviews and discussions!